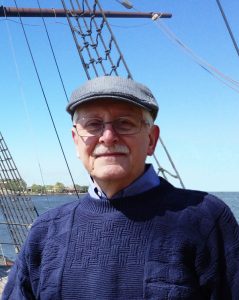 David’s childhood was not unlike others’ in the Midwest at that time; camping, catching frogs, reading Mad magazine, sci-fi, and books about far-away places by Frank Buck, Edgar Rice Burroughs, and Isaac Azimov.

In Chicago as an adult, he worked for a publication printer of National Geographic Magazine and Playboy, while selling paintings on weekends at art shows. As the printing industry floundered in the big city, David found a position as an illustrator and cover designer for a publishing company in the northern suburbs. After years working for imprints of Simon and Schuster, Pearson, and Harcourt & Brace, he went solo, starting his own freelance business.

Out of curiosity, he began researching a French tall ship, la Renommée, the fastest one of its age, launched in 1744. It soon turned into a quest to uncover more facts and tales of the captains and people involved with the frigate. It was then he realized what a bounty of material he had gathered. An interesting story had emerged that begged his imagination to cast a light on it for others to enjoy. Having written reports, speeches, and articles for both an e-magazine and a graphic arts trade journal, he decided to begin a book on the ship and its remarkable commanders.

Over a decade later, The Ship’s Carpenter, his debut novel, was published by FireShip Press. The first of the Tween Sea & Shore Series of historical nautical books, within a year it had won two prestigious Finalist Awards for both ebooks and writing from the Page Turner 2020 Awards, an international English-speaking book competition.

The second book in the series, Captains of the Renown, continues the tale of the characters in the first book and adds new historical and fictional ones to the plot and was released in April 2021. The third is currently scheduled to be released in 2022.